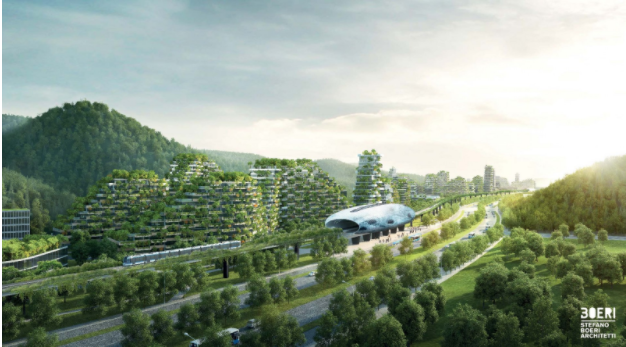 The idea that cities can be incorporated into nature, as opposed to taking it over, is intriguing. As the climate continues to change, populations continue to migrate to cities further driving urbanism, and society places ever-increasing importance on sustainability, Italian architect Stefano Boeri from Stefano Boeri Architetti has sought to address these challenges through his work.

Boeri wants to eradicate the concept of a concrete jungle. His latest contribution to the worldwide Vertical ForestING trend he was responsible for starting, Vertical Forest City, seeks to stop urban sprawl by constructing a 30,000 person city that works symbiotically with nature; one that works with nature, as opposed to taking it over.

Located in Liuzhou on the Liujiang River in China’s mountainous Guanxi region, construction on the 138-hectare site began in 2017. Once completed in 2020, the green city will be capable of housing up to the 30,000 residents and will include residential housing, commercial offices, hotels, two schools, multiple recreation areas, and a hospital. Over 100 species of flora will be dispersed throughout the city which will contribute nearly 40,000 trees and 1 million plants. Together, this biomass will absorb 10,000 tons of CO2 and 57 tons of pollutants every years and produce 900 tons of oxygen.

Furthermore, the diffusion of plants along streets, in parks and gardens, and on building facades, will contribute to improving the quality of the surrounding air for residents, as well as create natural nose barriers, decrease average air temperatures, and provide a habitat for Liuzhou’s native fauna, thereby improving the biodiversity of the region.

The sustainable city will be connected to Liuzhou by fast rail and will be energy self-sufficient, drawing on geothermal energy for air-conditioning and solar panels to power other energy requirements.

Boeri’s Vertical Forest City is not without precedent. In 2014, his first Vertical Forest design, Bosco Verticale, was opened in Milan. A pair of award-winning residential buildings in Milan’s Porta Nuova district reaching heights of 110m (361 ft) and 76m (249 ft) respectively, the design incorporates over 900 trees and 20,000 plants. The success of this project, as well as Vertical Forest City, has gone on to inspire other projects around the world including in three other Chinese cities, Nanjing (due for completion in 2018), Shanghai and Shenzhen.

Modelo’s occasional blog series on green architecture examines how architecture is making a contribution to increased sustainability within our built environment. In another post on this topic, we posted about building sustainability and the movement an increasing number of architects and contractors are making towards designing and building green homes.

One thought on “How to stop urban sprawl? Build a vertical green city”